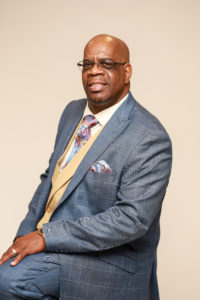 …….”Behold, I have caused thine iniquity to pass from thee, and I will clothe thee with change of raiment…” Zechariah 3:3-7

Bishop Duane Bell strives and labor to be a blessing to the Kingdom of God and all of His people. He is an astute preacher, prophet and teacher who flows in the prophetic and releases profound revelation to the mysteries of God’s word. His desire is that every child of God understands; who they are in Christ, to recognize their specific call in Christendom, and to help them discern the various shifts and maneuvers of God as they fulfill their divine purpose in Him.

Called into righteousness at the early age of 17 years old, Bishop Bell was baptized on April of 1979. Months later God completed his spiritual calling by filling him with the precious gift of the Holy Ghost on December 2nd of that same year. He resided 19 years under the biblical tutelage of the late Pastor Maudell Dillard, of the Glorious Church of God in Christ #1 in Richmond, VA where he served in various leadership capacities at the local, state and national levels. He later received his ministerial license in June of 1991 and was ordained to preach the word of God in August of 1992.

In April of 1999 the Spirit of God led the then (Elder) Duane Bell to matriculate to New Beginning Tabernacle Ministries where he continued his pastoral tutelage as an associate minister under Bishop Cleveland Hill, who birthed a new dimension of ministry out of his bowels…which was that of the prophetic! Soon after on October 17, 1999 Elder Duane Bell, with Evangelist Patricia Bell by his side, established New Destiny Apostolic Church (formerly Greater Works Evangelistic Ministries) and was installed as “Pastor” of this new fledgling ministry. God showed Pastor Duane Bell that promotion was in the atmosphere, and after much deliberation through fasting and prayer, he answered his call to the bishopric. On April 28, 2007 he was ordained and consecrated to the office of “Bishop” by the illustrious Bishop Perry Jenkins of Fresh Anointing International Christian Ministries. Granting Bishop Bell’s desires to have a covering, God led him to Bishop Glen A. Staples and the Temple of Praise International Fellowship of Churches in 2006.

New Destiny membership conception consisted of his wife, their three sons and four other foundation members. It started in a small stand-alone storefront building. As the power of God began to move through the community, many souls were ushered through their doors to receive their deliverance from drug additions, promiscuous sexuality, broken marriages, demon possession and various infirmities. The ministry has now been relocated to a 10,000 square foot facility at 4800 Brittles Lane in Henrico County, Virginia where the membership continues to grow, thanks to the faithfulness of God Almighty and those who want to see souls set free.

God joined this mighty man of valor with the eternal love of his life in the person of Patricia U. Stoumile on November 17, 1984 and through this divine union they brought forth three sons: Duane Quinten, Justin Lamar, and Peyton LaShaun.